Launching of the investment reform plan: an innovative scheme for inclusive growth at the service of citizen 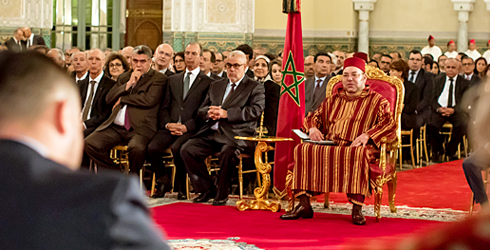 Under the effective presidency of His Majesty King Mohammed VI, the Minister of Industry, Trade, Investment and the Digital Economy, Mr. Moulay Hafid Elalamy, presented on July 4th the investment reform plan. This new charter marks a crucial step in the realisation of the priority reforms for the building of a competitive and efficient economic model.

Mr. Elalamy stressed that in order to “reach emerging country status and enable all citizens to fulfil their aspirations, the Kingdom has attended to create the conditions for a sustainable economic growth, in which investment acts as a catalyst”. The level of investment and the growth rate are strongly correlated. Investment promotion is hence crucial to boost job creation and offer more opportunities to young people, improve the quality of public and private services and connect citizens to globalisation and the digital revolution.

The new framework set by the Investment Charter breaks with a static approach to investment support. It is intended to evolve along with the initiated sectoral strategies and reforms. It is also characterised by the clarity of the proposed reforms. Three mains categories are mentioned:

Regarding incentives, Mr. Elalamy has announced 5 key measures that will enable the Kingdom to increase its attractiveness and seize more opportunities:

A powerful promotion tool: the Moroccan Agency for the Development of Investments and Export

A new agency, the Moroccan Agency for the Development of Investments and Export (AMDIE), under the Ministry of Industry, Trade, Investment and the Digital Economy now combines the Moroccan Investment Development Agency (AMDI) and the Office of Trade Fairs & Exhibitions (OFEC). The new structure will support investment of all levels on the basis of roadmaps drafted by the sectors.

The industrial sector is committed to an irreversible progress dynamics. By deploying the Industrial Acceleration Plan 2014-2020 (PAI), the Kingdom rose to a new stage of industrial acceleration, which will be sustainably supported and led by the Directorate General for Industry.

The new industrial strategy is fundamentally based on the development of investment and the commitment of operators to create 500,000 manufacturing jobs by 2020.

Respecting these commitments, especially in terms of job and value creation requires a solid structure able to accompany the initiated dynamics of achievements.

The automobile sector has achieved an outstanding performance. It holds the 1st position as for exports and achieves 50 billion dirhams of export turnover. The recent ranking of the 20 first global automotive suppliers shows that 8 players are already established in the Kingdom.

The collaborative approach for the launch of industrial ecosystems has enabled the structuring of 12 sectors in 41 ecosystems urging operators to reach the ambitious objective of creating 250,000 jobs during the first two years of implementation of the strategy (50% of the targeted figure).

The adopted approach, which is coordinated and responsive to the need of investors, has enabled to achieve 83% of the IAP’s objectives by the end of June 2016, that is to say 132 billion DHS of exports and 427.000 jobs among which 160.00 have already been created within actual projects under completion.

In return for the operators’ achievement of the objectives in terms of job, value and export creation, the State is committed to unlock targeted support mechanisms:

Finally, the status of the self-employed has been implemented. The Kingdom now counts 27,000 self-employed people presently connected to the productive circuit of the Nation.

… to lead the national project of the Commerce sector

The Maroc Commerce 2020 strategy brings about a fundamental change and creates a break with the sector’s strategic positioning. The strategy is based on three pillars:

… to successfully integrate the economy to international circuits

An overhaul of the digital strategy was undertaken and an agency dedicated to the digital economy and e-government was created to accompany the implementation of Maroc Digital 2020. This new agency “signalled a break in the execution of the digital strategy and fosters the digital ambitions of the Kingdom, in responding to the pressing needs of effective virtual administrative services aimed at its citizens”, explained Moulay Hafid Elalamy.

This initiative reflects the firm commitment of the State to accelerate its digital transformation. Henceforth, one in two administrative procedures will be carried out online. The Kingdom further opens up to the global economy as more investors will establish themselves in the country and more economic opportunities will arise. The citizen will be able to access these high quality and efficient online services thus achieving better productivity and reducing the costs for administrative services. Digital technology is called on, in fact, to position itself as a true inclusive growth enabler with better transparency in the management of public action and greater equity regarding the access to socio-economic opportunities.

To achieve the successful entry of Morocco into the digital era, Maroc Digital 2020 specifically aims to:

The achievement of these ambitious objectives outlined for the sector are supported by the quality infrastructures developed in the Kingdom currently on the podium of the MENA region, together with the national digital ecosystem to be structured soon. It includes a network of powerful actors among which 5 Moroccan powerhouses in the African top 30.

On the occasion of the presentation of the Investment Charter, a pioneering partnership was sealed between the Ministry of Industry, Trade, Investment and the Digital Economy and OCP Group. An agreement was signed between the two parties for the development of an OCP ecosystem in the areas of Jorf Lasfar, Khouribga, Safi, Gantour and Laâyoune over the period 2016 – 2020.

This ecosystem will be based around the large industrial firms and the Moroccan SME subcontractors in the sectors: “Mining and Chemicals Equipment”, “Operations, Industrial Maintenance and Services”, “Multidisciplinary Industrial Construction”, and “Chemicals and Fine Chemicals”.

Structured in this way, the ecosystem will improve the level of integration of the Group’s purchases, as well as increase the total investment of the suppliers.

On the occasion of the ceremony of unveiling the Investment Charter, major investment agreements were signed under the chairmanship of His Majesty King Mohammed VI, may God assist. These agreements initiated large-scale projects proving once again the dynamism of investment in the Kingdom.

The Delphi group, specialising in the design and manufacturing of automotive equipment, plans by 2021 to launch seven new investment projects in Morocco, to establish a research and development centre for automotive systems, and to create 13,000 additional jobs.

Linamar Corporation, world leader in the fabrication of engine parts and appearing in the top 25 of the “Roland Berger” prestigious ranking of equipment manufacturers for the year 2016, is setting up a production unit for engine parts to serve its clients (PSA, Ford, VW, etc.). The investment by Linamar in Morocco amounts to 2.69 billion dirhams and will lead to the creation of 1,000 jobs.

The Portuguese group Simoldes, specialising in plastics processing, plans to create a 10 hectares industrial complex in Morocco devoted to the fabrication of moulds and parts for vehicle interiors and exteriors.

The activity generated by Decathlon’s project in Morocco will create a further 10,910 direct and indirect jobs.
The other 26 finalised investment agreements concern the sectors of textiles, aerospace, automotive, medicines and offshoring. In total 39,007 jobs will be created with an investment of 7.5 billion dirhams.

The activity generated by Decathlon’s project in Morocco will create a further 10,910 direct and indirect jobs.
The other 26 finalised investment agreements concern the sectors of textiles, aerospace, automotive, medicines and offshoring. In total 39,007 jobs will be created with an investment of 7.5 billion dirhams.