Partnership between Boeing, the world leader in aerospace, and the Kingdom of Morocco for the creation of a sourcing ecosystem. 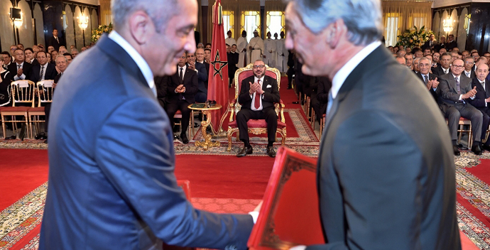 Under the effective presidency of His Majesty King Mohammed VI, a Memorandum of Agreement was signed this Tuesday in the Royal Palace in Tangier with a view to creating an aerospace suppliers ecosystem in Morocco.

The major project undertaken by the world leader in aeronautics consists of structuring an ecosystem formed by suppliers and organising a sourcing platform based in Morocco. This ecosystem will reach an annual export turnover of one billion dollars , lead to the establishment of 120 Boeing suppliers and allow the creation of 8,700specialist jobs . To cover the training needs of its ecosystem, dedicated training programs specially designed by Boeing will be implemented.

This contract is the result of a convergence between the operational requirements of the global leader in its search for skilled suppliers with quality-oriented production, able to deliver on time with competitive conditions, and the competitive advantages offered by Morocco, especially an infrastructure complying with international standards, qualified human resources and cost-effective production conditions.

The Memorandum of Understanding was signed by the Minister of Industry, Trade, Investment and the Digital Economy, Moulay Hafid Elalamy, and the President of Boeing Commercial Airplanes, Ray Conner.

On this occasion, Minister Elalamy stressed that «the Boeing ecosystem will transform the Moroccan aeronautical landscape by further accelerating the sector’s expansion and strengthening its position as a quality-oriented production hub. By stimulating investments, the project will generate employment, added value and encourage the development of qualified labour through the development of new specialisations and highly technological profiles. A driving ecosystem enhances the efficiency and attractiveness of the sector while at the same time creating a virtuous circle of prosperity within the national economy ».

The President of Boeing Commercial Airplanes, Ray Conner, stated that « With a relationship of trust of nearly 50 years with Morocco, Boeing is proud to work with the government in developing the Moroccan aerospace industry and to support production needs and the competitiveness of Boeing. Through our joint venture in Casablanca, we have witnessed the unique opportunities that Morocco offers to aerospace subcontractors to reduce their costs while producing high quality aerospace products. Together, Boeing and the Kingdom of Morocco have developed an incentive programme to bring new Boeing suppliers to settle in Morocco. Furthermore, we will also work closely in forming the future workforce of the country. This agreement is witness to the vision of His Majesty the King and the cooperation of the Moroccan government with Boeing to orchestrate this winning partnership for the future».